Early in the 20th century, inspired by the emerging realization in science that all manifestation in the universe is “energy” and “vibration”, Buckminster Fuller began experimenting with models of structural forms in the quest to discover how nature coordinates this energy to create all the beauty and magnificence of life. Fuller called himself a “comprehensivist”, one who holds a comprehensive perspective that seeks to synthesize apparent “parts” into an ever-unifying wholistic understanding. In his quest he discovered what he referred to as “nature’s coordinate system”, the geometric articulation of energetic relationships, which he named Synergetics.This “energetic-synergetic” geometry became the foundation for his entire body of research and problem solving on behalf of all humankind and planet Earth for over half a century. He in fact once stated that humanity coming to understand synergetics was one of the most important steps in our evolution. As implied by the name, synergetics has at its core the principle of synergy: the behavior of whole systems unpredicted by the behavior of their parts. For Fuller, it became clear that by understanding the principle of synergy and applying it to all aspects of designing our social and technological systems wherein we can do “more with less”, we can achieve his stated mission: “to create a world that works for 100% of humanity through spontaneous cooperation and without ecological offense or the disadvantage of anyone.”

As a testament to the sheer magnitude of understanding that Fuller embodied, he authored two massive volumes entitled Synergetics: Explorations in the Geometry of Thinking. 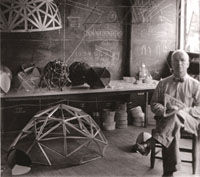 Fuller’s discovery of the Vector Equilibrium as the “zerophase” of energetic manifestation laid the foundation for our ever-emerging understanding of the cosmometry of the “zero-point” or “vacuum” of space — or Unified Field — and the entirety of cosmic manifestation that arises when this state of perfect equilibrium is perturbed. As seen in the Cosmometry 201: Structural Cosmometry: Vector Equilibrium article, the VE as an energetic system exhibits a pulsating dynamic that arises when it moves out of equilibrium and returns back again. During its non-equilibrium phases of the journey it manifests the primary structural forms that comprise all of the platonic solids, thus it is the true source from which all that we know emerges — the zerophase of reality.

Fuller describes this in more metaphysical and spiritual terms, illuminating the foundational understanding of cosmometry that all is energy and consciousness:

Synergetics: Explorations in the Geometry of Thinking. The entire contents of these books has been made available for browsing online thanks to the Estate of R. Buckminster Fuller, the Estate of E.J. Applewhite and the dedicated work of Robert Gray and can be found at http://www.synergetics.info.

Register For This Site